“From Dehradun to Dublin, from    Shanghai to Chicago, from Jakarta to , yoga is everywhere,” declared Prime Minister Narendra Modi today on the occasion of the 4th International Yoga Day. Even as the PM spoke, people were celebrating the day with mass yoga performances everywhere, from beaches to mountain tops – even at 19,000 feet above sea level in the Himalayas like the ITBP ‘Himveers’ in Ladakh. Not just India, countries around the world are celebrating today as International Yoga Day. And that, said the PM, is a matter of pride for the country. 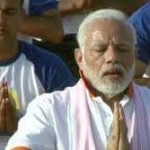 This “biggest mass moment” has shown the world the path from ill health to well-being, said Modi. As well, this “ancient yet modern” discipline gives hope for the future of humankind, he said.
“Instead of dividing, yoga unites. Instead of furthering animosity, yoga assimilates. Instead of increasing suffering, yoga heals,” said Modi, explaining how the discipline can lead to a calm, creative and content life.

Along with the Prime Minister, around 50,000 yoga enthusiasts kick-started International Yoga Day celebrations in Dehradun.