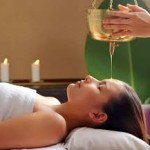 Panchakarma is a procedure which can be undertaken by any healthy individual to maintain one’s health and also to prevent body from different ailments.

In his treatise on Panchakarma , Acharya Charaka mentions about the following processes –

Vamana
Virechana
Vasti
Nasya
Raktamokshana
Panchakarma as a scientific process is defined through the word’s suffix ‘Karma’ and classified in three parts.

Pachana: In this procedure, the patient ongoing to Panchakarma process is given natural Ayurvedic medicines e.g. Trikatu powder for three days to ignite one’s digestive fire (agni).
Only after maintaining the patient’s digestive fire the next procedure i.e. Snehana is undertaken.

Snehana: Snehana is also known as medicated oleation process. It is defined as a process which maintains Snigdhata (unctuousness), mriduta (softness), dravata (liquidness) as well as Picchilta (slimeyness) physiological atmosphere of the body.
Swedana: Swedana is also known as medicated sudation process. It is defined as the process by which perspiration is produced which removes the feeling of stiffness and heaviness from the body and a helps bring a natural calming effect on the person.

Coronavirus: Putin says vaccine has been approved for use