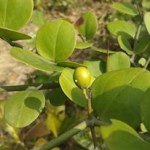 The karanda is a sprawling semi-vine shrub native to India. Leaves are from one-and-a-half to two-and-a-half inches long, very dark green, shiny and opposite and they have large spines like many other Carissas. If the leaves or stems are injured, the white milky sap is seen, which is characteristic of this group of plants. Although carissa karanda can be kept clipped into a shrub, it really prefers to act much like a vine similar to bougainvillea and will climb to the tops of rather tall trees. Small fragrant three-quarter-inch white flowers, with rose stalk, are produced from early spring through late fall and the clusters of small purplish to black fruit ripen from May through October. Fruit size is variable, but most fruits are about three-quarters of an inch in diameter with a few seeds. Fruits usually occur in clusters somewhat resembling large purple grapes. Fruit quality is excellent in this author’s opinion, somewhat resembling that of a blueberry in flavor. Fruits can be eaten fresh or used for jellies or jam.
Taste of Karonda:-
The sweet nectar form the shrub’s flower has better taste than the karonda fruit itself. In its raw state, the fruit is sour and acidic with little sweetness. In its ripest phase it becomes a bit sweeter, but only a few varieties become sweet enough to be edible in its raw state.
Its close cousin, garnu (Carissa spinarum) is much sweeter and enjoyed by those who try it. Unfortunately, the close resemblance in name, appearance and lineage cause many to mistake karonda for this sweeter version.
However, karonda possesses several attributes that make it a highly desirable for culinary applications.
Nutritional Value of Karonda:-
According to an analysis published in the book, “Minor Fruit Crops of India,” C. carandas has the following composition:

An additional nutritional study published by the National Bureau of Plant Genetic Resources provides the following nutritional information per 100g of edible fruit: