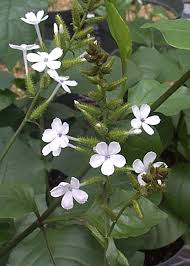 Plumbago zeylanica, commonly known as Chitrak, is an herbaceous plant that has been deeply researched for its anti-cancer properties, properties which are thought to be exerted due to the high content of Plumbagin, an active constituent found in Plumbago zeylanica, Juglans regia (English Walnut), Juglans cinerea (whitenut) and Juglans nigra (blacknut)
Now, a group of scientists and researchers from the Department of Human Oncology, University of Wisconsin, have discovered how Plumbagin, a quinoid constituent isolated from the roots of the medicinal plant Plumbago zeylanica used in Indian and Chinese systems of medicine for more than 2,500 years for the treatment of various types of ailments, inhibits in vivo prostate cancer development in the transgenic adenocarcinoma of mouse prostate .
The Department of Human Oncology, University of Wisconsin, were the first ones to publish in another study in 2008 how plumbagin inhibited the growth and invasion of hormone refractory prostate cancer cells.  Plumbago zeylanica (White Leadwort and Chitrak ) native South Eastern Asia (and India ) medicinal ornament evergreen shrub  .This ornamental plant is one of ten to twenty species of Plumbago flowering plants. Leadwort flowers are white and extend up to half inch across and appear all year long. The flowers provide pollination for insect life.  “Dark green leaves are ovate to 6 inches (30 cm) long by half as wide.” A mature evergreen plant can reach up to six feet however proper pruning and pot size can limit the size of the plant. Plumbago zeylanica grows health in full to partial shade, intermediate warm temperatures, slightly acidic soil (no lime added), and recommended two parts peat moss to one part loam to two parts sand. The evergreen flowers abundantly grow strong when kept moist and fertilized weekly (mixer 15-30-15). “The fruits are like small cocklebur with glue on the soft spines and they will stick to anything.” Seeds of the White Leadwort provide the best source to produce new plants (germinate in 21 to 3 days of 70 degrees Fahrenheit). Alternatively, cuttings of the evergreen produce future propagating plants. The root and seeds of the Pluambago zeylanica contains potent medicinal properties taken in small doses, otherwise paralysis and death could result.
Plumbago zeylanica Roots, bark and seed are used for variety of medicinal treatments. The roots of the evergreen increase the digestion and promote appetite, and small doses stimulate central nervous system. The root of the plant is made into a paste and applied to the skin to treat abscesses, and other skin diseases including ulcers and scabies.  “The powder (Chitrak) may be added to bath teas for acne prone skin or for those suffering from chicken pox. “In Africa, a cold infusion of the root is used for influenza and black water fever.”  In Zimbabwe Plumbago zeylanica root is cooked with meat in soup as an aphrodisiac. Bark of the Plumbargo zeylanica used to stop bleeding, cure baldness, and treat diarrheas. “In Ethiopia powdered bark, root or leaves are used to treat gonorrhoea, syphilis, tuberculosis, rheumatic pain, swellings and wounds.” Root-bark is useful to treat obesity. Also, Chitrak is used to correct menstrual disorders, and viral warts.
Large doses of the White Leadwort roots is not recommend, cause death from respiratory failure and powerful poison. Also, the root (and leaves ) of the plant is not recommend for use during a pregnancy cause an abortion, however known to be taken deliberately cause abortion in Malaysia and Africa .
Plumago zeylanica recommend not be used to treat any symptoms unless under the supervision of a physician or qualified herbalist because of the potent ingredient of the plant may prove hazardous to those who have liver and kidney disease besides causing paralysis that can lead to death.
Evidence has shown when Plumago zeylanica is administered orally inhibit tumor growth in laboratory rats. Second leading cause of cancer related deaths, prostate cancer maybe potentially inhibited by medicinal plant Plumago zeylanica.

New coronavirus targets cells in the nose, lungs, and gut