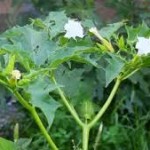 Datura, is a genus of nine species of vespertine flowering plants belonging to the family Solanaceae. They are known as Angel’s Trumpets.Varied species of Datura have been used in traditional medicine worldwide, primary among them Datura innoxia,Datura metel, and Datura stramonium. Datura are potent members of the Solanaceae family, relatives of other well known narcotic plants such as henbane and mandrake. The primary use of datura is as a hallucinogenic and intoxicant, though it does have medicinal uses. Seeds or powered datura leaves are often mixed cannabis and smoked to relieve asthma, and rheumatism in Indochina and Africa. In Mexico it was taken by women to relieve the pain of childbirth.The seeds are added to wine and beer to increase intoxication.
Datura Side Effects: Seeds are extremely toxic, the leaves less so,the whole plant contains powerful alkaloids. This is not a plant to be taken lightly. Can be fatal and cause permanent mental imbalances if abused.Healing Power and Curative Properties and Benefits of Datura
The dried leaves and seeds of datura are used in the British and the United States Pharmacopoeia as antispasmodic under critical conditions of asthma and whooping cough. Datura possesses properties analogous to those of belladonna. It counteracts spasmodic disorders and induces deep sleep.
Asthma:-
Datura is very useful in asthma, when the smoke from the burning leaves is inhaled. The leaves rolled into cigarettes can be smoked to relieve asthmatic attacks.
Malaria:-
Datura fruit is a specific remedy for phlegmatic and bilious types of malarial fever. A desired quantity of the fruit should be placed in an earthen pot and covered with a plaster composed of cloth and clay. It should be parched in to to 12 grams of cow dung cakes. When the fire gets extinguished and the pot is cold, the burnt fruit should removed, powdered and kept safely in a phial for use in malarial fever.
Heart Disorders:-
The herb is valuable remedy for heart disorders. It relieves cardiac pains, distress, palpitation and aortic disorders.
Earache:-
The leaves of the herb are useful in the treatment 01 earache. About 125 grams each of the juice of datura leaves and sesame oil should be boiled in a tin vessel on gentle fire. When half of the juice has evaporated, seven leaves of gigantic swallow wort (akh) should be put in it after smearing them with oil and sprinkling with powdered salt. The leaves should be boiled till they begin to char. This oil is then filtered through a coarse cloth and preserved in a bottle. A few drops of this oil in the ear cure earache and suppurative conditions of the ear.
Impotency:-
Datura is useful in impotency. The seeds of 15 ripe fruits should be extracted and boiled in eight kilograms of cow’s milk on gentle fire. This milk should then be made into curd in the usual way and churned the next morning to extract butter which is stored in a broad-mouthed bottle. This butter, massaged every morning and evening on the penis and the spine, will provide the desired effect. It is also used as an oral medicine. Four grains with betel leaf can be taken. The use of this butter both externally and internally in this way will gradually promote health and vigor and restore absolute fitness in the body.
Baldness:-
A preparation made from datura seeds with other ingredients is useful in patchy baldness. A paste made with datura seeds, liquorice, saffron and milk cream is heated in coconut oil thoroughly till the solid mass converts to a charred powder. The oil when applied on bald patches has the power to stimulate hair growth. As datura is poisonous, hands should be washed thoroughly after handling the oil. The mixture should not be used on the scalp of children.
Problem of Breast Milk Secretion
The herb is highly beneficial in checking secretion of breast milk. In case of an unfortunate death of a newly born baby, accumulation of milk in the breasts of. the mother poses a problem, causing severe pain. In such a case, warmed leaves of the datura tied on the breasts will help dry the milk without any pain and difficulty. Just 2 or 3 applications will bring the desired results.
Precautions:- The usual dose of datura is about 2 decigrams. In large doses, it may lead to dilation of the pupils and dryness of the mouth and throat.