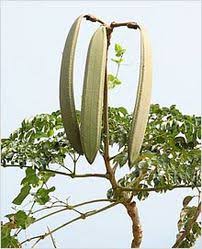 English Name: Broken bones plant, Indian calosanthes, Indian Trumpet, Indian trumpet flower, midnight horror,oroxylum, tree of Damocles
Hindi Name:भूत वृक्ष bhut-vriksha, दीर्घवृन्त dirghavrinta, कुटन्नट kutannat, मण्डूक manduk (the flower), पत्रोर्ण patrorna, पूतिवृक्ष putivriksha, शल्लक shallaka, शूरण shuran, सोन or शोण son, वटुक vatuk.Oroxylum indicum is native to the Indian subcontinent, in the Himalayan foothills with a part extending to Bhutan and southern China, in Indo-China and the Malesia ecozone..
It is visible in the forest biome of Manas National Park in Assam, India. It is found, raised and planted in large number in the forest areas of the Banswara district in the state of Rajasthan in India.
It is also reported from Sri Lanka .The Oroxylum indicum seed is used in the traditional Indian ayurvedic medicine. The root bark is also used, administered as astringent, bitter tonic, stomachic and anodyne. It is included in famous tonic formulations, such as Chyawanprash.
The bark of O. indicum (Chinese : 木蝴蝶树皮, hanyu pinyin : mù húdié shùpí) or Cortex Oroxyli is a traditional Chinese medicine ingredient.
The bark of O. indicum (Singhala / Sri Lanka: Totila, Totilla) is one of main ingredients in Sri Lankan indigenous medicine (in decoctions) as a remedy for pains in joints or rheumatism.Pharmacology
The leaf contains chrysin and baicalein. Tetuin, the 6-glucoside of baicalein, is reported in the seeds. Other flavonoids, known for their anti-inflammatory and anti-allergy effects,are also present, though it may need to be used in high doses to get a response. Oroxindin has also been isolated from Oroxylum indicum whereas oroxylin A is reported in the root bark.Oroxylum indicum (Bignoniaceae), also known as Sonapatha or Shyonaka is commonly used herbal medicine in Ayurvedic system. Roots, leaves and stems of Oroxylum indicum have been used as a single drug or as a component of certain compound drug preparations in the Indian Ayurvedic system of medicine for treatment of various disorders as well as used as a tonic and Rasayana drug. It contains flavonoids like chrysine, baicalein and Oroxylin-A. Various studies indicated that sonapatha possesses anticancer, antioxidant, hepatoprotective and immunomodulaory properties mainly. Various other effects like antibacterial, analgesic and gastro-protective properties of sonapatha have also been reported. It is a tree that is found generally in damp region. In the present review an attempt has been made to compile and critically analyse various published reports on Oroxylum indicum.The roots are sweet, astringent, bitter, acrid, refrigerant, expectorant, digestive, carminative, febrifuge, diuretic, antimicrobial, antifungal, anti-inflammatory and tonic. They are useful for vata and kapha, dropsy, flatulence, colic, diarrhea and dysentery. Stem bark paste is applied for the cure of scabies and to treat arthritis. Leaf decoction is given in treating stomachache, ulcers, rheumatism pain and enlarged spleen. Mature fruits are useful in treating cough, bronchitis, piles, jaundice dyspepsia, smallpox, colic, leucoderma, pharngodymia, cardiac disorders, gastropathy, hemorrhoids and cholera. Seeds are used as purgative. Dried seed powder used by women to induce conception. Seeds yield non-drying oil used in perfume industry. Stem bark and fruits are employed as mordent, the stem bark yields a khaki color dye. The decoction of the roots is commonly used for arthritis. Used externally as a paste of its skin of roots, it dries up the discharges and promotes the wound healing.