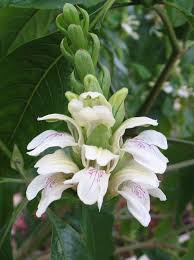 Vasaka, also called adhatoda, adalodakam.The name of this plant was derived from Malayalam . The leaves of this plant was not eaten by goats as it is bitter aHence the name.This herb is very widely found and it was common to have a brew made with these leaves boiled in water with black pepper corns added. The benefits were captured in the western system of medicine and the extracts are used in expectorants.Vasaka is used in ayurveda abundantly for different diseases, this is the only herb which can pacify both pitta and kapha doshas. The details of this herb in Ayurveda is as follows- Sanskrit Name: Vasa Vasaka Vasika – Means one which covers a large area, here area coverage stands for a protective cover on the body Singhasya- Means a plant having flowers like the mouth of the lion Vajidanta-Means a plant having white flowers like the teeth of a horse Vrusha- Means one that showers the honey i.e. having a lot of nectar Aatrushaka
Lt. Name: Adhatoda vasica- Acanthaceae
Bio energetics: Rasa (Taste)- Tikta (Bitter); Kashaya (Astringent) Guna (Characteristics)- Laghu (Light); Ruksha (Rough) Veerya (Potency)- Sheeta (Cool and calm) Vipaka (Post digestion effect)- Katu (Pungent)
Action according to Ayurveda: Shwashara- Useful in Respiratory discomfort specially asthematic conditions Kasahara- Useful in acute as well as cough Chhardihara- Alleviates nauseatic conditions Vatakrit- Increases air component in the body Swarya- Improves voice Hrudya- Cardiac tonic Trid hrit- Alleviates excessive thirst Kushthahara- Useful in all types of skin diseases Kshayapaha- Useful in emaciation, undernutrition and all similar conditions Raktapittahara- Useful in bleeding tendencies.
The leaves, flowers, fruits and roots are extensively used for treating cold, cough, chronic bronchitis and asthma owing to the herb’s well-known mucolytic and expectorant properties.
Vasaka grows in the plains and lower Himalayan ranges up to 1000m above sea level. It grows on wastelands and in a variety of habitats and soil. It is sometimes cultivated as a hedge. It is a small, evergreen, perennial shrub with elliptic, ovate or lanceolate leaves. The leaves are light green above and darker on the lower surface.Chemical composition
The principle constituents of Vasaka are its several alkaloids, the chief one being vasicine. The leaves contain two major alkaloids called vasicine and vasicinone2,3.
The pharmacological activities of vasicine and vasicinone are well known. Recent investigations on vasicine showed bronchodilatory activity comparable to theophylline, both in vitro and in vivo. Both the alkaloids in combination showed pronounced bronchodilatory activity.