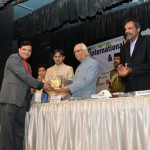 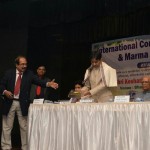 The most awaited conference on AYURVEDA and Marma Science was inaugurated by Honorable Governer of West Bengal Sri Keshari Nath Tripathi.The conference witnesses a no.of International delegates,speakers,business persons,diplomatic community as well as scientific community.During the inaugural session Governer of West Bengal told the audiences that Ayurveda is a most effective system of medicine but it needs more scientific researches.He told the audiences that during my law practise, I have pleaded a case in which the petition was filed against injectable use of Ayurvedic Drugs.I have found that ‘Soochikabharan’ (Method of injection) was already mentioned in Ayurvedic texts.He told a small memory to Ayurvedic scholars that when he was the leader of UP assembly he got a chance to visit the Government Ayurvedic College Hospital ,Tudiyaganj,Lucknow.He surprised after seeing that the number of in-door admissions are very less.Ayurvedacharya ‘s will have to think more  about this situation.He told that the need of hour is to promote more researches in Ayurvedic Science.In his one and half hour Inaugural speech he explored his own experiences about Nadi-Vigyan.The best part of the Inaugural Session was the eye-opening Presentation of Professor Sunil Joshi on Marma Science.He explored that Marmas are vital points ,which can be used as healing point as by putting certain amount of pressure over their .This therapeutic procedure can cure many ailments like Frozen shoulder,Paraplegia,Nervine Disorder as well as disability.He clearly mentioned that he expreinced this fact by overwhelming  results in number of patients.In this occasion he gifted his book on ‘Marma Science’ to the Governer.Senior former scientist Dr A. K. S Rawat told that research on Ayurved should be promoted to develop more effective formulations to treat different ailments where modern medicine has limited results.The President of ‘Human Service Trust’ Mauritius and founder of Mahatma Gandhi Ayurvedic Hospital Mauritius,Sri Premchand Boojhawan shared his experiences to establish Ayurved over their.Dr Naveen Joshi got award of excellence  from Governer of West Bengal Shri Keshari nath Tripathi for successfully organizing an International Conference on Ayurveda in State of West Bengal  where Ayurvedic Science has lot of challenges.Sri Kunj Bihari Singhania , Secretory ARSP Felicitated all the dignitaries,Guest and Delegates with momento,Shawl and garland with Rudraksh.Former Diplomat Pandit Manish Uprety,F.R.A.S. co-founder of -Ayush Darpan Foundation was also present in the conference.