The plant is an annual, climbing shrub with long vines that can reach over 15 m in length. When the plant is young, it is almost completely covered with fuzzy hairs, but when older, it is almost completely free of hairs. The leaves are tripinnate, ovate, reverse ovate, rhombus-shaped or widely ovate. The sides of the leaves are often heavily grooved and the tips are pointy. In young M.pruriens plants, both sides of the leaves have hairs. The stems of the leaflets are two to three millimeters long. Additional adjacent leaves are present and are about 5 mm long.The seeds of Mucuna pruriens have been used for treating many dysfunctions in Tibb-e-Unani (Unani Medicine).The plant and its extracts 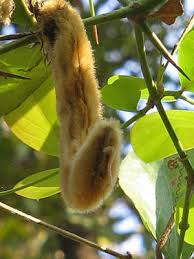