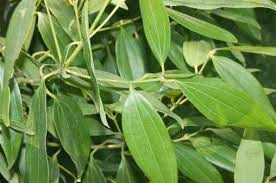 ndian bay leaf or malabathrum (Cinnamomum tamala, Lauraceae) is somewhat similar in appearance to the leaves of bay laurel, but is culinarily quite different, having a fragrance and taste similar to cinnamon (cassia) bark, but milder.If eaten whole, bay leaves are pungent and have a sharp, bitter taste. As with many spices and flavorings, the fragrance of the bay leaf is more noticeable than its taste. When dried, the fragrance is herbal, slightly floral, and somewhat similar to oregano and thyme. Myrcene, which is a component of many essential oils used in perfumery, can be extracted from the bay leaf. They also contain the essential oil eugenol.Bay leaves are a fixture in the cooking of many European cuisines (particularly those of the Mediterranean), as well as in the Americas. They are used in soups, stews, meat, seafood and vegetable dishes. The leaves also flavor many classic French dishes. The leaves are most often used whole (sometimes in a bouquet garni) and removed before serving (they can be abrasive in the digestive tract). Thai cuisine employs bay leaf (Thai name bai kra wan) in a few Arab-influenced dishes, notably massaman curry.
In Indian and Pakistani cuisine, bay laurel leaves are sometimes used in place of Indian bay leaf, although they have a different flavor. They are most often used in rice dishes like biryani and as an ingredient in garam masala. Bay (laurel) leaves are frequently packaged as tejpatta (the Hindi term for Indian bay leaf), creating confusion between the two herbs.Bay leaves can also be crushed or ground before cooking. Crushed bay leaves impart more of their desired fragrance than whole leaves, but are more difficult to remove, and thus they are often used in a muslin bag or tea infuser. Ground bay laurel may be substituted for whole leaves, and does not need to be removed, but it is much stronger due to the increased surface area and in some dishes the texture may not be desirable.Indian medicine: In Indian medicine, the leaf and fruit are believed to facilitate menstruation when taken orally. The fruit may also treat diarrhea and conditions of abnormal vaginal discharge. The oil is included in topical treatments for dandruff and rheumatism. The leaves may be used to prevent or treat infections, as a digestive aid, to induce sweating, as a sedative and as a gargle to soothe a sore throat.European medicine: The leaves may have been burned to fend off plagues. For sprains, a poultice of the leaves steeped in oil may have been considered to relieve pain. The fruit is purportedly taken orally to speed childbirth. In England, a hot water extract of the fruit has been reportedly used to stimulate menstruation. In Italy, there are many reported uses for bay leaves and fruits. An infusion of the leaf may be drunk to improve digestion or sleep. Drinking an ethanol and water extract is believed to treat an upset stomach. The fruit might be used as a laxative. The essential oil may be used topically to soothe bruising and hemorrhoids. A blend of olive oil and dried bay fruit soaked in alcohol might be applied to painful joints. A decoction of the dried leaves may be a topical treatment for inflammation. A poultice of bay leaves might be applied to insect bites. A leaf infusion may also act as an antispasmodic, sedative and digestive.