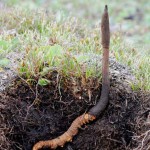 Codyceps sinesis, also know as Chinese caterpillar fungus, or cordyceps is a parasitic fungus Cordyceps bat moth larvae in the body of the sub-Block and larval body complex. Ergot fungus belonging to orders, ergot fungus Brach, Coydyceps. As the name suggests, Chinese caterpillar fungus of course, is a worm in winter, while in summer it becomes a grass. Why amazing? It turned out that Cordyceps bat moth is a know animal, will be producing eggs in the ground to make it grow like silkworms hatched larvae in general. In addition, there is a spore, will go through water infiltration into the ground, seek out the parasitic bat moth larvae, and larvae of the body to absorb nutrition, and rapid reproduction, know as the Cordyceps fungi. When the hyphae grew slowly at the same time, the larvae have grown up with the slow, but drilled the ground. Until the mycelium to grow to a full of parasites, the larvae will die, this time exactly winter, that is, the so-called winter worm. When air temperatures rise, the mycelium will be the head slowly from the winter worm germination, grow grass like a normal child seat of fungi, known as summer grass. The head of the child seat in fungi contain ascus, ascus containing a spore. When the ascus mature, spores will be shed, once again looking for the bat moth larvae as hosts, this is the cycle of Cordyceps sinensis.
Winter worm, summer grass, Cordyceps sinensis is a treasure. “Chinese caterpillar fungus called Cordyceps, Chinese caterpillar fungus parasitic fungi in winter moth larvae to the development made in summer. Cordyceps hence the name.
From the appearance point of view, Chinese caterpillar fungus parasites golden yellow, light yellow or yellow-brown, and also because the price is expensive and the “golden grass,” said. Because of its high medicinal value, efficiency is good, at home and abroad are regarded as treasures. The market demand is strong, but the amount of its scarce natural resources, so the price is very expensive.
Whether the worm or caterpillar fungus grass? More simply, that is, vespertilionidae bat moths for many types of other offspring, spawing in the soil, after the eggs into larvae, previously, the cordyceps fungus penetrated larvae absorb the material as the survival of larvae of the nutritional conditions, and the larvae continue to breeding, resulting in larvae filled with mycelium, in the coming year 5-7 when the weather gets warmer months, since the larvae grow yellow or light brown head and seat of the bacteria, the growth was out of the ground after the grass stalk-like, the result we usually see caterpillar fungus. Thus, the shape of both insects and grass, but Non-insect non-grass and algae are bacteria.
Cordyceps sinensis is mainly distributed in China’s Qinghai, Tibet, Sichuan, Yunan, Guizhou, Gansu, about 4,000 meters above sea level at high altitude. Professionals, according to the different origin are divided into Qinghai, grass, grass Tibet, Sichuan grass, Yunan grass. There are also produced in Qinhai to Tibet, collectively know as the possession of Cordyceps sinesnsis. Generally speaking, Qinghai, Tibet, Coydyceps sinensis produced in the two places than in other part of the intrinsic quality of a good, well received by the market welcomed the price of higher.
Caterpillar fungus expensive Chinese herbal medicine, referred to as ” Chinese caterpillar fungus.” Cordyceps fungus (see ergot section), the parastictic larvae of moths in the bat. Were parasitized larvae overwinter in the frozen soil layer below, know as winter worm. Winter bug due to the progressive development of fungal hyphae into the body and the dead. In summer, ministers from the dead larvae out of a handle head and neck, and slender rod child seat, child seat out soil, the grass seemed to be known as the summer grass. Dead larvae and fungi collectively known as the sub-blocks.Cordyceps sinensis in China, 26 species, 24 species are known to be parasitic insects. Host insects, including Coleptera, Lepidoptera, Homoptera, Hemiptera, Hymenoptera, Diptera, isopteran,Orthoptera and spider, to parastic coydyceps bat moth larvae in the Lipidoptera, the most valuable. Larvae host plants Polygonum viviparum underground stem. Born in grasslands over the ground. Produced in China, Sichuan ,Yunnan, Gansu, Qinghai and Tibet provinces.