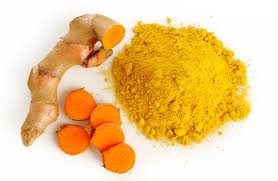 Turmeric (Curcuma longa) /ˈtɜrmərɪk/ is a rhizomatous herbaceous perennial plant of the ginger family, Zingiberaceae. It is native to tropical Indian Subcontinent and needs temperatures between 20 °C and 30 °C (68 °F and 86 °F) and a considerable amount of annual rainfall to thrive.[3] Plants are gathered annually for their rhizomes, and propagated from some of those rhizomes in the following season.
When not used fresh, the rhizomes are boiled for about 30–45 minutes and then dried in hot ovensafter which they are ground into a deep orange-yellow powder commonly used as a spice in Indian cuisine and even curries, for dyeing, and to impart color to mustard condiments. Its active ingredient is curcumin and it has a distinctly earthy, slightly bitter, slightly hot peppery flavor and a mustardy smell. Curcumin has been a centre of attraction for potential treatment of an array of diseases, including cancer, Alzheimer’s disease, diabetes, allergies, arthritis and other chronic illnesses.Turmeric grows wild in the forests of South and Southeast Asia. It is one of the key ingredients in many Asian dishes. Indian traditional medicine, called Ayurveda, has recommended turmeric in food for its potential medicinal value, which is a topic of active research. Its use as a coloring agent is not of primary value in South Asian cuisine.
Turmeric is mostly used in savory dishes, but is used in some sweet dishes, such as the cake Sfouf. In India, turmeric plant leaf is used to prepare special sweet dishes, patoleo, by layering rice flour and coconut-jaggery mixture on the leaf, and then closing and steaming it in a special copper steamer (goa).
In recipes outside South Asia, turmeric is sometimes used as an agent to impart a rich, custard-like yellow color. It is used in canned beverages and baked products, dairy products, ice cream, yogurt, yellow cakes, orange juice, biscuits, popcorn color, sweets, cake icings, cereals, sauces, gelatins, etc. It is a significant ingredient in most commercial curry powders.
Most turmeric that is used is in the form of rhizome powder, in some regions (especially in Maharashtra, Goa, Konkan and Kanara), turmeric leaves are used to wrap and cook food. This use of turmeric leaves usually takes place in areas where turmeric is grown locally, since the leaves used are freshly picked. Turmeric leaves impart a distinctive flavor.
Although typically used in its dried, powdered form, turmeric is also used fresh, like ginger. It has numerous uses in Far Eastern recipes, such as pickle made from fresh turmeric that contains large chunks of soft turmeric.
Turmeric is widely used as a spice in South Asian and Middle Eastern cooking. Many Persian dishes use turmeric as a starter ingredient. Almost all Iranian fried dishes consist of oil, onions, and turmeric followed by any other ingredients that are to be included.