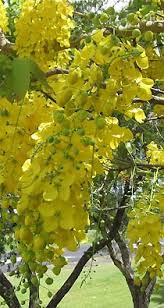 Called by many names such as Aragwadha, Chaturungal, Karnaikar and Rajvriksha in Sanskrit and Cassia fistula scientifically, amaltas has been amply described in ancient Indian literature including the Ramayana and the Mahabharata. Its medium-size tree is found throughout the greater part of India and is favoured for planting along roadsides and in gardens. Though all parts of the tree are medicinal, it is the long cylindrical fruit that generally represents the herb.Amaltas has been used in Ayurveda as a gentle laxative which can be taken safely even by children and expectant mothers. Charaka was so much impressed by its efficacy that in his compendium he named a special chapter after it. Sweet in taste and heavy, soft, unctuous and cold in effect, amaltas is a pacifier of vata and pitta but has also been described as the purifier of vitiated pitta and kapha of the colon.
Though the root, leaves, flowers and fruit pulp of amaltas have common laxative properties, all of these have different medicinal value also. Whereas the root is a strong purgative and killer of intestinal worms, the leaves are a blood purifier and anti-inflammatory. Amaltas flowers have demulcent and lubricating properties and the fruit pulp is a soft laxative. It is also an anti-pyretic, a diuretic and an expectorant agent.
Ayurvedic texts have indicated the use of amaltas in a wide range of diseases. Though its most common use is for relieving constipation, it is also a very efficacious drug in various skin diseases like scabies, pruitis, boils and glandular swellings.
Amaltas is used in liver disorders, upward flow of the abdominal gas (udavarta), bronchitis, arthritis and some of the metabolic disorders.
Since amaltas is easily available, it can be safely utilised as a household remedy in a number of diseases. Here are a few tips:
Constipation and piles: As a soft and safe laxative, 10 to 20 gm of the pulp should be soaked in a glass of water for a few hours. After straining, this water can be taken at bed time. To manage occasional piles, boil together 10 gm each of amaltas pulp, hararh and munakka and take this decoction for a few days at bed times. Besides clearing the bowels, it also helps in checking the bleeding resulting from external or internal warts.Gout and rheumatoid arthritis: As a first step towards the treatment of arthritis ayurvedic texts recommend using Rasna Saptak Qwath which, along with other ingredients, contains almaltas. Yet as a home Remedy in rheumatoid arthritis, a decoction of its pulp can be taken as a vehicle with 2 gm of the powders of sonth, hararh and giloy.
Skin diseases: The dressing of the juice or paste of the leaves of amaltas is very effective in ringworm infections. It is also applied in chilblains. The famous Aragwadharishta is a useful medicine in a number of stubborn skin diseases.
Caution: To avoid adulteration, it is better to purchase the dried amaltas fruit instead of the pre-extracted pulp. Fresh pulp can be obtained by breaking it open. Though the use of amaltas is generally safe, an overdose can result in griping in the abdomen besides temporary discolouration of the urine.